In 2019 Indonesia ranked third place in a row of tropical countries losing primary forest. In that year, 324.000 ha of primary forest was lost, an area slightly bigger than Luxembourg. 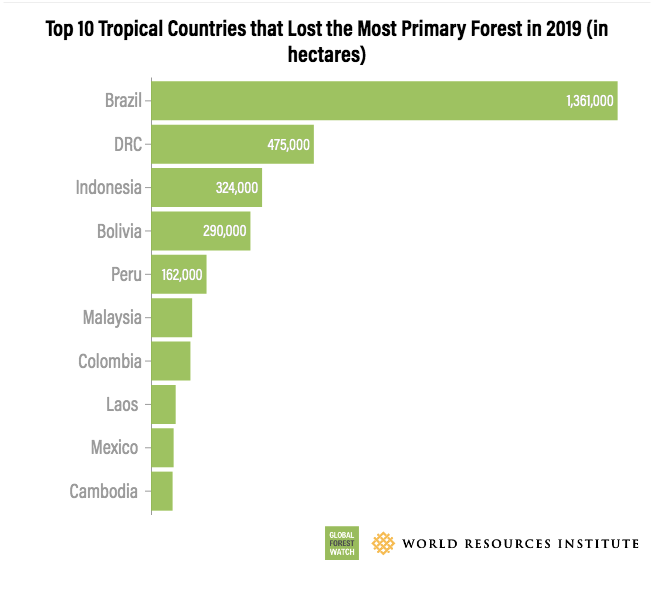 Since the beginning of 2010’s palm oil expansion slowed

Since the beginning of the 2010s, we can observe a reversing trend: Large-scale palm oil expansion has started to slow and so did deforestation associated with it. After peaking in 2009 and again in 2012, expansion of oil palm plantations went down strongly contributing to less than 15% of total deforestation in more recent years. Most recently in 2020, deforestation within palm oil concessions was the lowest in Southeast Asia during the past years.

These slowing trends suggest that measures taken to combat deforestation start to bear fruits. In 2011, the Government of Indonesia introduced a national moratorium on new permits for the conversion of primary natural forests and peatlands. Many palm oil buyers established zero-deforestation policies and implemented measures to increase the transparency in their supply chains, which encouraged plantation companies to stop deforestation practices. But also oil palm prices started to decline around the same time that the expansion of palm oil plantations slowed.

Other drivers of deforestation gained in importance

Deforestation in Indonesia did not immediately follow the declining trend of oil palm expansion in 2012. In fact, deforestation was at its highest in 2016. Particularly after 2013, deforestation was increasingly associated with small-scale agriculture and grassland/ shrubland conversion (Figure below).

Conversion to grassland was particularly high after it had been very dry in 2015, which led to higher incidence of forest fires. 2015-2016 was a period in which  massive forest fires caused a loss of 929,000 hectares of forest – an all-time high. Only after 2016, deforestation dropped to levels as low as in 2003. The low levels of forest loss in 2017 and 2018 can at least partly be attributed to wetter years with lower fire incidence. But also enforcement of new and enhanced forest and peatland protection policies in response to the 2015-2016 fire crisis seem to have done their part in reducing deforestation. 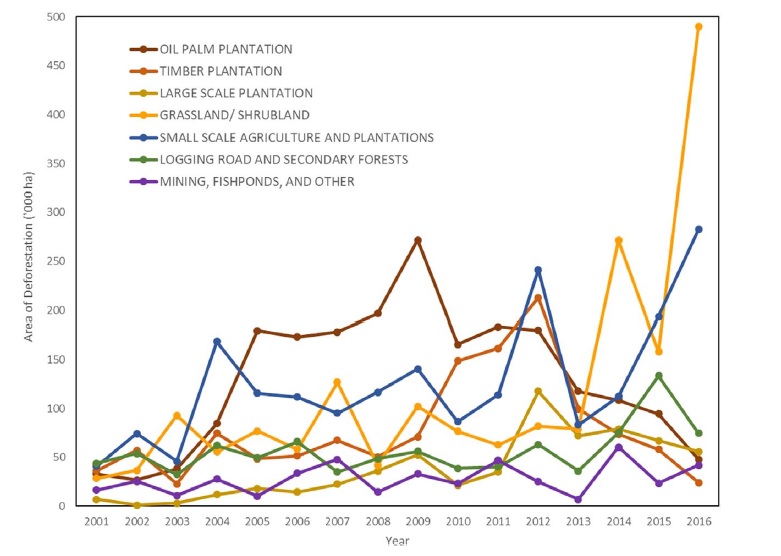 Will deforestation continue to decline in Indonesia?

Jan Maarten Dros has his doubts: ‘Because of climate change and because forests are getting increasingly fragmented, I don’t expect [deforestation caused by] forest fires or smallholders to go down very much’, Jan Maarten says in the Webinar. Also Graveau et al. (2021), who associated deforestation trends with industrial palm oil expansion, remain critical: While current slowing trends in deforestation and the commitments of many producers to avoid deforestation justify cautious optimism, deforestation has not disappeared. How will the sector respond to rising palm oil prices? How will the relaxations of forest regulations that occurred in response to the Covid-19 pandemic affect deforestation? This leaves us with the question: What is needed to combat deforestation from palm oil?

One solution may be to create rewards for keeping forests standing. The reason why forests are cut is that agricultural commodities – be it palm oil, coffee or cocoa – provide a better source for living to smallholders than leaving forest standing. Smallholder agriculture is increasingly responsible for forest loss in Indonesia. Often deforestation can be linked to poverty. The reason why palm oil and smallholders are such a good match is that palm oil generates good income and it has contributed significantly to reducing rural poverty in the past. Thirty-six percent of the area under oil palm in Indonesia in 2019 was managed by smallholders. Twenty-five percent of total forest conversion from the palm oil sector was associated with these smallholders. For many smallholders, deforestation is a strategy to survive. In our concerted action to combat deforestation from palm oil we need to take smallholders into account. By supporting them in their agricultural practices for better yields, by connecting them to sustainable palm oil markets, and by providing financial incentives for leaving forests standing.