A ban would not improve sustainability, neither from environmental nor from socioeconomic perspectives. But improved sustainability policies are definitely required.

Global demand for palm oil has been increasing tremendously over the last few decades, and so has its production. Palm oil is made from the fruits of the oil palm, a crop that only grows well in tropical environments. Nowadays, Indonesia and Malaysia are the biggest palm oil producers and exporters worldwide (Fig. 1). The European Union (EU) is one of the major importing regions. Seventy percent of the global palm oil is used for food, either directly as vegetable oil or as an ingredient in a large number of processed food items ranging from chocolate spread to frozen pizza. The other 30% is used in non-food industries, including biofuels and cosmetics.

However, in spite of its widespread use, palm oil has a bad reputation. Many primarily associate palm oil production with tropical deforestation, climate change, loss of habitat for orangutans and other endangered species, and the displacement of local communities to make space for the large oil palm plantations of multinational companies. Against this background, it is often claimed that palm oil should be banned, in order to avoid all these negative outcomes. Several large food-processing companies have switched to other vegetable oils and successfully use a “without palm oil” label as a marketing tool, targeting sustainability-conscious consumers. Even countries and regions, such as the EU, have considered palm oil import restrictions and bans on sustainability grounds.

But would banning palm oil really improve global sustainability? The answer is a clear “no”, neither from an environmental perspective nor from a socioeconomic one.

Let me explain, starting with the environmental perspective. It is true that the expansion of palm oil plantations has contributed to tropical deforestation. Globally, about half of the current oil palm area was developed at the expense of forests, which has led to significant biodiversity loss and carbon emissions. But banning palm oil would mean that the demand for vegetable oil would have to be met through a higher production of other oil crops, such as soybean, sunflower, or rapeseed. This would require much more land, as oil palm produces 3-4 times more vegetable oil per hectare than any of these other crops. Hence, replacing palm oil with other vegetable oils would lead to even higher losses of forest and other natural habitats.

Conversion of natural land to agricultural land is the main threat to biodiversity, especially in tropical regions, and also accounts for 50% of all the greenhouse gas emissions from agriculture. That’s why additional land-use change must be avoided to the extent possible. But even when ignoring yield differences and simply comparing environmental effects per hectare of land, oil palm as a plantation crop is featuring more favorably than annual oil crops in terms of carbon sequestration, fertilizer use efficiency, and field biodiversity. In other words, replacing palm oil with other vegetable oils would not decrease but rather increase the environmental and climate footprint of production.

One may argue that – instead of replacing palm oil – reducing overall demand for vegetable oil could also be an option. This is very true. Reducing the vegetable oil quantities needed through more conscious consumption, decreasing waste, and avoiding the use of inefficient biofuels is definitely important to foster sustainability. Nevertheless, the global quantities needed will continue to rise, mainly driven by population and income growth in Africa and Asia. Against this background, choosing those crops and production technologies that can help to meet the rising demand in the least-environmentally destructive way should have high priority from a broader sustainability perspective, which always needs to consider environmental, social, and economic objectives.

Let me now elaborate more on the socioeconomic perspective. There are indeed well-documented cases where local communities in Papua or Borneo lost their traditional land rights or were displaced by expanding palm oil plantations. These are unacceptable incidents, but they are not representative of the broader effects of oil palm on the local population. In Indonesia and Malaysia, over 40% of the total palm oil land is managed not by large companies but by small family farms with average landholdings of less than five hectares. Our own research in Sumatra, one of the hotspots of Indonesia’s recent oil palm boom, shows that these smallholder farmers benefit significantly from cultivating this crop.

Oil palm is more profitable than alternative crops, such as rice, cassava, rubber, or vegetables. Hence cultivating oil palm contributes to income gains and thus improvements in nutrition, health, and child education. Our longer-term data from Sumatra show that oil palm cultivation has raised farm household living standards by 15-20%, even after controlling for confounding factors. Non-farm households have benefited too, as the oil palm boom has improved employment opportunities, wage rates, and rural infrastructure. The rapid growth in the palm oil industry has halved the poverty rates in Sumatra and many other parts of Indonesia and Malaysia (Fig. 2). Banning palm oil would thwart these positive socioeconomic developments, potentially threatening the livelihoods of millions of local farm and non-farm households. In Africa, even more than 70% of the palm oil is produced by smallholder farms. 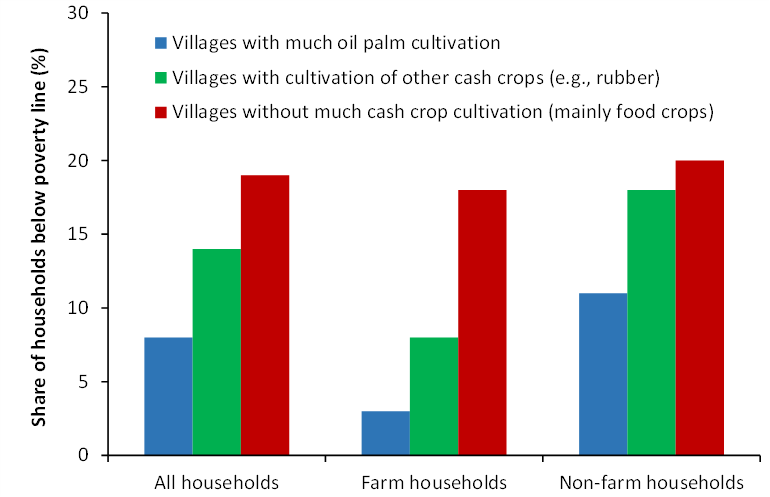 However, my conclusion that banning palm oil would not improve sustainability does not mean that everything is good. It isn’t. There are several areas where improved policies must be implemented to increase sustainability in the palm oil sector:

For further details, readers are referred to a recent review article by Matin Qaim and co-authors on the environmental, economic, and social consequences of palm oil production.

23 November 2020 we organised a free webinar with Dr Matin Qaim. Click on the image to listen to the recordings.